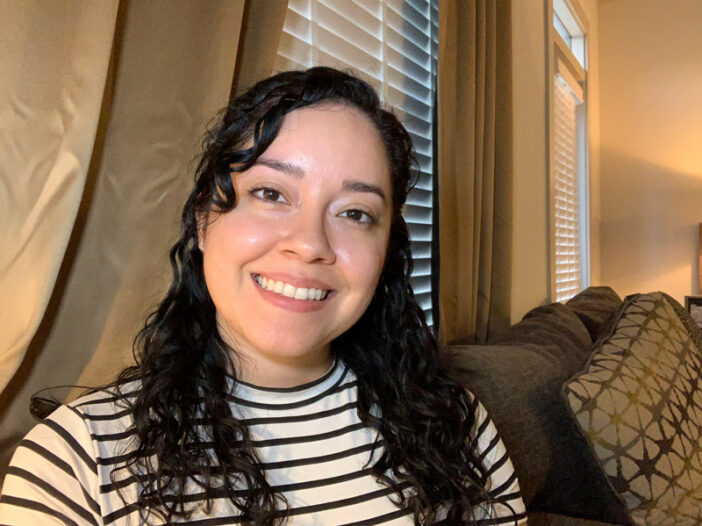 Violeta Rodriguez is a VCU student majoring in Spanish. During her time at Reynolds Community College, she was involved in the Pathways program and was part of the Mellon Research Fellows. For her research project, she created a podcast talking about Mental Health for the Latinx Community. We spoke with Violeta and her experiences with finding different resources in Richmond, VA.

Interviewed and written by Serena Truong, Intern at VAVP

What was it like finding mental health resources in Richmond for the Latinx community?
During my research with the Mellon Pathways Program, I was starting to get frustrated, because I thought I wasn’t looking hard enough. It turned out there weren’t enough resources around the Richmond area, especially the ones that would speak Spanish or that were bilingual.

Are there specific accommodations for individual ethnicities?
We’re really all just grouped into one large pool. The only specifications I have seen is their religious culture, because I know that can be very important when talking to the Hispanic community. If the person wasn’t religious, they would still be grouped together however they wouldn’t bring it up and only focus on the bilingual aspect.

Were there any resources specifically for LGBTQ People?
I did not see any counselors that spoke Spanish and had the LGBTQ certification; it was either one or the other. The LGBTQ community needs somebody to talk to and can understand Spanish. That’s another thing we have to add to our list in Richmond.

Have you found low-cost options?
I had one recommendation for a counselor that offered low-cost pricing for her services but she didn’t speak Spanish. I haven’t done much digging in terms of pricing. It’s more difficult to find counselors or psychologists that will give a cash rate, because I know the majority of them do take health insurance and with the Latinx community, it can be difficult to get health insurance for them.

What did you think about doing translation for your mom when you were younger?
It was considered normal to me and my siblings to be translating documents and translating appointments and phone calls for our mom. As a child, I never saw it as a responsibility until I got much older that I realized how big of a task that is for children.

What is the culture like surrounding mental health growing up in the Latinx community?
It’s very taboo. It’s something we never spoke about or that was ever brought up. If you were experiencing some type of sadness, your parents would tell you to push those emotions to the side. They never sat down to talk to you about it. It’s a culture thing and it’s been around for generations. As my parents are getting older, they’re starting to understand what I’ve been trying to communicate with them about mental health. My mother recently got diagnosed with anxiety and depression. She asked me about it to help her understand it, but then later backtracked and was like “Oh, no, the doctor is crazy. I don’t think I need any of this. I can deal with this on my own.” It’s something that has never been spoken about in our culture and it needs to be. I think the younger generation needs to step in with their parents and really talk about it. It can be difficult conversation but it needs to be done.

How did your podcast start and any future plans?
It was the best medium to share my information and doing a podcast was something that I always wanted to learn how to do. Doing the podcast made me learn so much about myself and about Richmond. I want to talk about the progress of mental health resources. If there’s any new resources, I would like to interview the people involved. I want to keep it specifically for Richmond for the Latinx community as a resource. I was thinking about doing the episodes in Spanish and either translating them into English or having an English transcript, but I do want most of the episodes in Spanish so they can have access to them as well. In the future, I will make a website, if I could find someone who would help me out with the layout so I can have all the resources written down.

Is there any place or organization that you want to shout out?
I definitely want to shout out Sacred Heart Center. That place has a place in my heart for sure. That is one place they welcome anybody in the Latinx community, they don’t care where you came from and they treat you like family there. The first time I went in there just to volunteer, I already felt so welcomed. It felt like I was back at home. They talk with you if you have any questions about anything. They had told me as well that if they needed help with mental health resources, they would try to help them as much as they can, like if the counselor is far away or if the person needs transportation. They teach the Hispanic community here in Richmond how to speak English. They also have childcare services, cultural events, donation drives, and food pantries. I really want to get back to working with them because it holds a very special place in my heart. They do so much for the community.

What are some ways communities and organizations can improve the Latinx community in mental health?
There needs to be more Hispanic people that are willing to help out, especially the younger generation. That’s why I got into foreign language. I saw my mom struggle with being able to communicate with just doctors, I had to do the translation as a child. I would like to see more bilingual or first generation college students help out translating and working with other psychologists or becoming a psychologist and offering that bilingual aspect to help them with their mental health. There’s a lot of work that needs to be done in Richmond. I did an interview with the Director of Sacred Heart Center and she’s been working with the Hispanic community with Richmond for many years and she said that resources are improving in Richmond, but very slowly. Once I graduate, I want to help that movement more so it can move a bit quicker.